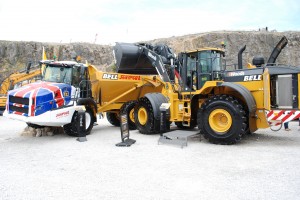 BELL Equipment UK has reported that a strong Hillhead has contributed to the company enjoying its most successful month for several years.

The company confirmed that it closed 20+ deals during the show. According to Richard Higgott, Sales Manager for Bell Equipment UK, the expectation throughout Hillhead was that this success is not isolated but reflects a shift in positivity industry-wide that is set to continue for the foreseeable future.

He said, “The difference is palpable from 2012, when there was still uncertainty about the prospects for construction.  This time, customers have a clear idea of the future and a long list of potential contracts. When they can plan for work, they are better able to buy machines to meet increased demand.”

That optimism was apparent in the number of deals Bell struck at Hillhead itself.  “We closed 20+ deals, ranging across the whole of our business – first-time and existing customers, ADTS and loading shovels, brand-new and used machines.”

The Hillhead stand welcomed the entire Bell Equipment senior management team, led by Chief Executive Gary Bell.  Nick Learoyd, Manager Director of Bell Equipment UK, said, “Gary and his team agree with our assessment that the UK is in a tremendously strong place for the next 3-5 years, and there is every reason why our current success will continue for a considerable time.”