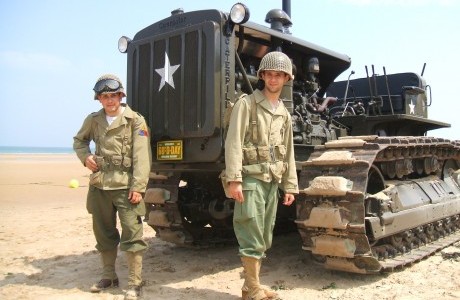 Finning customers Andrew Bettney and Paul Marriott are taking a 70-year-old fully operational Cat D8-8R track type tractor back to the scene of its past glory as part of the Normandy landings commemorations.

The tractor was known to be in service with the Royal Engineers 79th Armoured Division 819 Dozer Squadron that landed on Gold Beach near Arromanches. It is believed the machine may have been used to help lay down roadways and to tow broken vehicle.

The machine’s military background was traced back by its serial number and was one of a batch of 60 brought over from the United States in 1941. It sports the white star of the invasion forces and the Spanish fighting bull emblem of the Royal Engineers 79th Armoured Division.

After surviving the Normandy invasions, the Cat tractor returned to a more normal working life on mainland Britain.

Cat enthusiast Andrew Bettney said:,“We originally found the machine in Stonegate, East Sussex in 2003, but before that it had been working in forestry applications in Scotland.

“We started to scrape away some of the plates and discovered the green paintwork. After enlisting the help of the Royal Engineers at Chatham, we were amazed to find records to say that this tractor had actually landed on the Normandy beaches as part of the D-Day invasion.

“This really made the hairs on the back of my neck stand up. We decided that it was only fitting to take the Cat D8-8R back to Normandy for the 70th anniversary of the D-Day landings, in memory of the brave men who died during the invasion.”

Even after more than 70 years the machine is still fully operational and as part of the celebration, it will be driven in the Veterans’ Parade across Gold Beach.

Darryl Hodgett, Finning Service Control Supervisor, said: “As the official Caterpillar dealers for the UK we are immensely proud that this machine played a role in such a heroic day. It is testament to the build quality of such machines, even back then, that it continued to work in a more peaceful role for decades afterwards.”