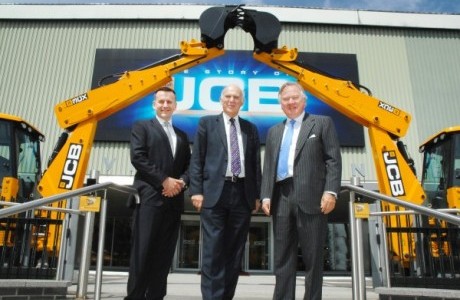 Vince Cable MP has visited JCB’s headquarters for an insight into their development of skills for the future and its global manufacturing operations.

The Secretary of State for Business, Innovation & Skills was first of all welcomed by JCB Chairman Lord Bamford at the JCB Academy in Rocester, the UK’s first academy dedicated to developing the engineers and business leaders of the future by delivering a technical education to 14 to 19-year-olds.

He was shown around classrooms equipped with more than £1 million worth of modern engineering equipment by Chair of Governors David Bell and Academy Principal Jim Wade. He also met a number of students during afternoon lessons.

After his whistlestop tour, Dr Cable was welcomed to the nearby JCB World Headquarters by JCB CEO Graeme Macdonald where he reviewed a line-up of innovative JCB machines for construction and agricultural markets.

The Secretary of State was also given a full tour of the Story of JCB, a permanent exhibition which charts the history of the Bamford family from the 1820s when they were blacksmiths in Uttoxeter, through to the present day and JCB’s rise to the world’s third largest manufacturer of construction equipment.

The visit came just 48 hours after Lord Bamford delivered his maiden speech in the House of Lords in which he highlighted the importance of technical education to the national economy and called for a coherent long-term industrial strategy to support the future growth of manufacturing as a vital component of the UK economy in the future.