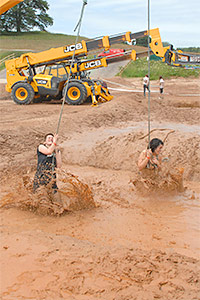 MORE than 2000 people are expected to compete in the JCB Mud Run this summer.

The event – which began in 2012 – has a specially designed five-mile course littered with over 20 obstacles on land near the World Headquarters in Rocester on Saturday, July 5.

Organisers are currently dreaming up a range of tricky tasks that participants will face. A huge mudslide and a 100ft underground tunnel are already confirmed, as well as monkey bars, swings and a whole host more.
Last year’s event attracted around 1,000 entrants and raised over £40,000 for the NSPCC. JCB Worldwide Marketing Director Matt McClurg said, “This year’s Mud Run is set to be even muddier, trickier and enjoyable than the previous two. The NSPCC is a fantastic cause, and we’re hoping to raise a record-breaking total for them.” Mud runners, who must be aged 16 or over, will be bussed to the course where they will find bag storage and washing facilities. Spectators are welcome, and there will be a mini mud run for children.   JCB Marketing Manager Andy Henderson, who’s taken part in the previous two Mud Run events, said, “It’s harder than you expect, muddier than you expect, but much more fun than you expect, too.” Registration must be completed in advance at www.thejcbmudrun.co.uk. The closing date is Friday, July 4