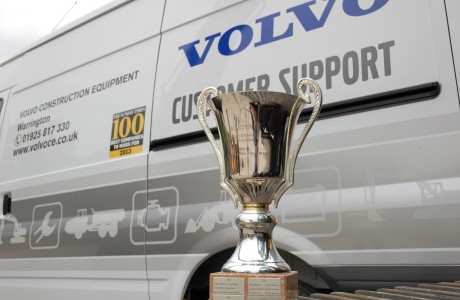 Testing the knowledge and competence of parts and service personnel worldwide, the team from Volvo CE’s Warrington customer support centre has won the final round of the Volvo Global Masters competition.

The team from Warrington representing Volvo Construction Equipment’s GB dealership has been crowned the 2014 champions in the Volvo Masters competition, a contest that tests parts and service personnel on their skills and knowledge of the company’s products. Over the course of national, regional and global rounds the original 3000 participants from dealers in four regions were whittled down over eight months to just one group of ‘Masters’, culminating with the British team proving victorious in a tightly-fought theoretical and practical nail biter.

The aim of the long-running competition is to increase the interest, knowledge and skills among Volvo CE’s service and parts technicians worldwide.It achieves this by generating healthy competition between dealerships, in a bid to find the most skilled technicians on the planet, the best men and women who ensure Volvo CE machines spend as little time idle as possible and whose vast expertise is an essential part of the company.

The competing teams were judged on their technical and parts systems knowledge, proper handling of tools and demonstration of Volvo’s core values in action. Moving from test station to station, the teams were faced with different challenges to tackle involving different model types across the Volvo CE range and a station that tested the teams’ understanding of CareTrack – Volvo CE’s unique telematics  system installed on all general purpose equipment.

At each station the team was given a work order and 10 minutes preparation to discuss how they might approach the problem. For example, on the excavator station, contestants might be told the customer had been complaining about the slow boom-up speed. That was the only information they were given. The rest was down to them. While the service technicians poured over mechanical problems, their parts colleagues were given questions to answer, testing not only their knowledge but also their ability to use the information available to answer them.

In third place came team Kuiken, from the Netherlands, second place was Team Rudd Equipment from the U.S. and the title of Volvo Masters 2014 went to Volvo CE GB, represented by Billy Heywood, Matthew Needham and Chris Walker, with Mark Armsworth in support as team coach.

“Each team had already proven themselves to be worthy champions, having won through a series of local, national, sub-regional and regional finals since the competition began in May 2013,”said Pål Torgersen, director of global competence development at Volvo CE. “As expected it was a close race to become the Volvo Masters of 2014. Out of initially about 3000 participants in the first round, 24 parts & service technicians had qualified for the global final and all merit recognition. My particular congratulations go to our deserving winners from Great Britain.”

“We are immensely proud of our lads bringing this high accolade for the first time to Great Britain and more specifically to the Warrington support centre,” comments Willie Watson the support centre manager. “Winning this trophy has given everyone here a sense of pride in their achievement.”