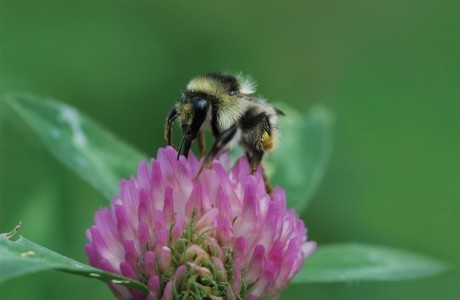 QUARRY workers across the UK are being recruited in the fight to preserve bumblebees.

The Mineral Products Association (MPA) has teamed up with the Bumblebee Conservation Trust (BBCT) to help safeguard bees. Back in November 2012, the MPA and the BBCT signed a memorandum of understanding. This was a significant step towards the protection, creation and restoration of flower rich habitats. It also extended the knowledge of those working on quarries about bumblebees in particular, and wildlife generally.

The BBCT was established because of serious concerns about the ‘plight of the bumblebee’. In the last 80 years our bumblebee populations have crashed. Two species have become nationally extinct and several others have declined dramatically. Much of the work that BBCT does is with farmers and other land managers, so working with quarries was going to be a challenging and learning experience for both partners.

Since 2012, BBCT has visited five quarries, all very different and requiring different approaches. But they have learnt through their visits how quarries can be surprisingly useful places for wildlife. The process often allows wildflowers to thrive, and pollinating insects like bumblebees can be abundant. There are many different habitats on quarries too and each one can be managed sensitively for bees.

As a result of the memorandum of understanding, the highlight of this year for BBCT was their visit to Wainwright’s Moon Hill quarry in Somerset – an MPA member. BBCT delivered a presentation to over 50 attendees at the Earth Science Centre. The room was full, the enthusiasm and interest for bumblebees was very clear, both during and after the presentation. BBCT are attending Moon Hill quarry’s open day on 6th September and hopefully encouraging more people to plant flowers for bees.

Part of BBCT advisory work with farmers and landowners includes ‘Farm Days’, where farmers are invited to come along to other farms to see what the farmers there are doing that benefits bees. BBCT hopes that it will be possible to hold such a day for quarries. The ambitions are to get more quarries thinking about what they can do for bees. Some restoration normally includes planting trees, there are some crucial trees for bees – the goat willow for example, which produces high quality nectar and pollen in March when bumblebees are emerging and need feeding up after their long hibernation.

BBCT also want quarry workers to start monitoring bees. This year saw the launch of their national BeeWalk scheme – the only national recording scheme that monitors the abundance of bumblebees providing early warning of declines. A network of volunteers walk a set route (1km) once a month between March and October counting and identifying the bumblebees they see.