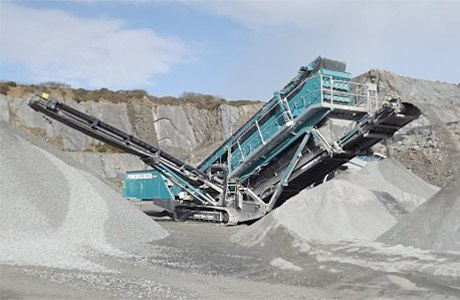 Covering the north of England, Borders and the Midlands areas for all contract crushing and screening applications, the family-run business now has over 65 employees and a portfolio of over 110 machines which consists of crushers, screeners, dump trucks, excavators and loading shovels.

As a long standing Blue Scotland customer, who has operated numerous Powerscreen and Pegson machines over the years, Banner once again chose the Powerscreen 1000 Maxtrak cone crusher when the requirement arose for a further cone in their fleet.

Director Jo Banner said, “We feel the 1000 Maxtrak is an excellent choice for an all round cone crusher.

“They have always worked well on our hard stone applications, giving us the required high specification product needed in terms of both cubicity and shape.

“The new Scania engine model of the Maxtrak not only meets our exacting production requirements but is also proving to be extremely fuel efficient, greatly reducing our running costs.”

Jo Banner added, “The three key features of the Chieftain 2100X are the reliability, durability and production – which in our business are crucial to our success.”