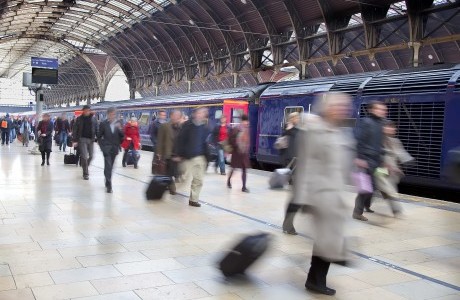 This amounts to almost £20 million a day and involved the creation of new stations, platforms, lifts, information systems, concourses, footbridges and track to build a bigger, better railway.

The figures were revealed in Network Rail’s full-year results for the 2013/14 financial year. They made a profit of almost £1.3 billion.

Passenger numbers grew by 5.7%. However, the number of train services running on time fell to 90% – 2.5% below the target figure. Congestion, extreme weather and slower improvements in asset reliability were partly blamed for the delays.

Passenger numbers have doubled since 1995 with a further 30% growth predicted over the next ten years.

Mark Carne, chief executive, said, “We are in the middle of a rail renaissance, with record levels of passenger numbers and record levels of investment. This flourishing sector is investing heavily to improve the railway for today and for tomorrow.

“With a million more trains on the network than 10 years ago, there are inevitable challenges – we are determined to do more to improve train reliability in the face of these challenges. We will increase the reliability of the network and make it more resilient to climate change. Continued investment in our railway will also be key if we are to grow our economy and deliver a better, improving, expanding rail network for millions of daily users.”

Patrick Butcher, group finance director, said, ”The last year has been one of operational and financial challenges. We have been disappointed with train performance but celebrate continued strong growth, savings made, swiftly repairing the railway following extreme weather and hundreds of projects completed to improve and expand the railway.

”Our determination cannot waver over the coming years as we look to restore train punctuality to record high levels and wisely invest £38bn to improve and expand our railway for passengers and businesses across Britain.”