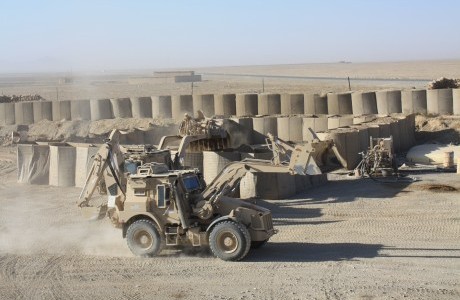 JCB has won a $50 million contract to supply high-speed backhoe loaders to the United States Army.

The High Mobility Engineer Excavators (HMEEs) will be manufactured at JCB’s North American plant in Savannah, Georgia, and will be delivered by 2017.

The US Army was the first military organisation to purchase HMEEs when in 2005 it ordered 636 of the machines – a JCB contract that was worth $206 million and which today remains the biggest single order in JCB’s 68-year history. Since then the company has gone on to sell the machine to armed forces in the UK, Sweden, Germany, the United Arab Emirates, Australia, New Zealand and other allied nations.

JCB Chief Executive Graeme Macdonald said, “Over the past 30 years, JCB has supplied armies in 57 countries with over 4,000 machines and we are delighted to build on that success by securing this latest contract with the United States Army.”

Arjun Mirdha, President and CEO of JCB North America added, “We are very proud to manufacture a machine that protects the lives of our servicemen and women in the course of their military duties.”