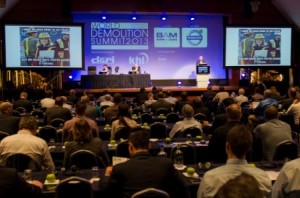 Presentations will include reports on the deconstruction and demolition of the HISmelt pig iron plant at Kwinana, Australia, by Simon Gill (Liberty Industrials), decommissioning the former Bethlehem Steel Sparrow Point plant in the US by David Mardigian of MCM and the demolition of the UK Ministry of Defence’s Upper Harbour Ammunition Facility outside Gosport by Michael Corridan (Micor).

The 2014 conference will build on the success of the five previous years’ gatherings with a top level programme made up of a mix of reports detailing how some of the most challenging demolition projects from around the world were successfully carried out, along with papers covering more general topics of specific interest to the world’s demolition industry.

The Summit is targeted towards contractors, but will also appeal to other stakeholders in the industry including consultants and engineers, major clients, those involved in the demolition equipment industry such as manufacturers, dealers, trade associations and many others.