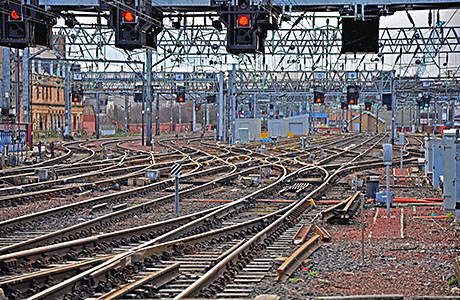 SCOTLAND’S railways are being prepared to do their bit to make this summer’s Commonwealth Games a success.

Network Rail is undertaking a programme of enhanced maintenance on the lines leading to key venues and investing in Glasgow Central to improve facilities at the nation’s busiest station.
Vegetation is being cut back on electrified routes and work is underway to increase the maintenance of vital infrastructure such as power and signaling equipment and key junctions.
Litter and graffiti will be targeted for removal on the approaches to busy locations including Glasgow’s Central and Queen Street stations and at Haymarket and Waverley in Edinburgh. At Glasgow Central, over £2m will be invested on a range of improvements to the facilities and appearance of the station.
The Union Street entrance will be refurbished and decorative stainless steel gates installed. The entrance to the lower level station will be upgraded and a new archway feature created to frame the escalators and direct customers towards the low level.
Work to electrify the Glasgow-Cumbernauld line and deliver a new station for the town in time for the Games is expected to be completed, with the new station open by late June.
Network Rail will also scale back non-essential engineering work across the Central Belt immediately before and during the Games to reduce the potential for engineering works to affect services and to make sure additional staff are available to respond to any fault during the event.
The decision to suspend major works in the weeks immediately preceding and during the Games is a similar approach to that being taken by other transport bodies.
As a result of these measures, work to electrify the Glasgow-Whifflet line will be slightly extended. Originally due for completion during July 2014, the project will be extended into early August. This extension will have no impact on services.
David Dickson, Network Rail acting route managing director for Scotland, said, “The work we are undertaking, and robust plans we have in place for during the Games, will help to make sure we can keep Scotland moving smoothly this summer.”