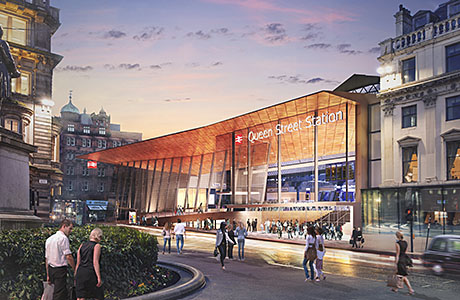 A public consultation on the proposed £104m transformation of Glasgow’s Queen Street Station has been launched.

Network Rail has unveiled new designs for how the station will look and wants to hear passenger views on the project.
20 million passengers use the station each year, making it the third busiest in Scotland.
However, it needs to expand to meet predicted growth to 28 million passengers by 2030 and to accommodate the longer trains that will be running on key routes in the future.
As well as overhauling Queen Street’s rail infrastructure and operational capabilities, the redevelopment will transform passenger facilities and improve how the station interacts with the surrounding city.
The project is part of the £650m Edinburgh Glasgow Improvement Programme (EGIP), which will deliver a programme of electrification across the Central Belt over the next five years and beyond.
Funded by the Scottish Government, EGIP will reduce journey times and boost capacity on routes including the main Edinburgh Waverley-Glasgow Queen Street line.
Transport Minister Keith Brown said, “Queen Street station is at the heart of Glasgow’s railway network and passengers using the station should enjoy an experience befitting of that role.
“The EGIP scheme will result in 30 percent more seats and around 20 percent faster journey times on our flagship route. It’s already delivered the stunning new-look £25 million Haymarket station in Edinburgh and this complete transformation of Queen Street means passengers will benefit at both ends and at all points in between.
“Before then, we’ll see the completion of electrification of the Cumbernauld line in time for the Commonwealth Games.”
David Dickson, Network Rail’s acting route managing director for Scotland, added, “We want to hear what passengers think of this exciting new vision for the future Queen Street – a vision of a station which better serves passengers and Glasgow and creates a landmark development in this iconic location.
“The new-look Queen Street will greatly enhance the city centre and we want the public to help inform the final design of a station that will serve their needs for years to come.”
With construction work due to begin this year and complete in 2019, the project to redevelop Queen Street will redevelop the east side of the building to extend the Buchanan Galleries and create new passenger facilities over two levels.
The plan is also to redesign the concourse to double public floor space, extend platform lengths, improve passenger circulation and enhance waiting areas, entrances and retail space.
The current 1960s entrance, and the hotel extension above, will be replaced with a 500m2 modern glass frontage.
The first part of the public consultation will run until May 31 2014 with a second taking place between September and December 2014. 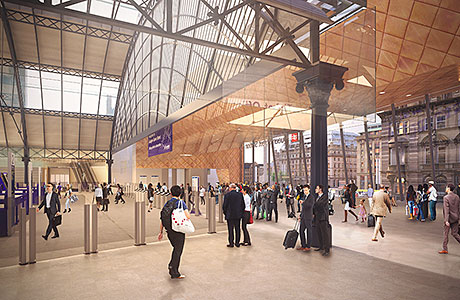