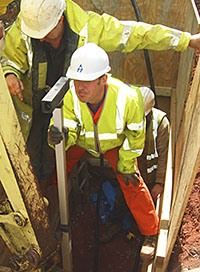 TT-UK are manufacturers of trenchless technology equipment. They’ll be exhibiting a range of products including their GRUNDOMAT ‘N’ soil displacement hammer.

First launched in 1970 and always a best seller the original GRUNDOMAT has progressed, transformed and evolved through various versions including the ‘E’, ‘Z’, ‘P’ and now the ‘N’.
The ‘N’ has not replaced or superseded the ‘P’ version as this is still available and continues to sell thousands of units a year.
Many customers are using both Grundomats with continued success, the ‘N’ version has all the normal features of the (moving head) ‘P’ version, but the ‘N’ version with the (reciprocating crown head) also has:
Crown head design for improved impact, ground handling and boring stability with higher penetration forces
Interchangeable options with multi cutter step cones (if required)
New thread design with locking wedge allows for easy assembly and disassembly
Two forward gears for variable stroke frequency for better handling and soft start launch stability and increased accuracy
The GRUNDOMAT ‘N’ is self-propelled using compressed air and a two stroke impact method.
Whilst in operation should an ‘obstacle’ be encountered and forward propulsion hindered, the crowned reciprocating head will continue chiselling independently; until the obstruction is fragmented and displaced.
This design drives the Grundomat mole fast and accurately through the ground, displacing and compacting the soil, whilst at the same time forming a bore hole through which pipes and cables can be pulled in simultaneously.
The GRUNDOMAT ’N’ has a triple gear control stud, with the frequency and speed of the striking impact being chosen via two forward gears.
This means that boring speeds can be altered to adapt to various soil conditions and provides smooth and constant propulsion.

Three in a row for Marubeni-Komatsu