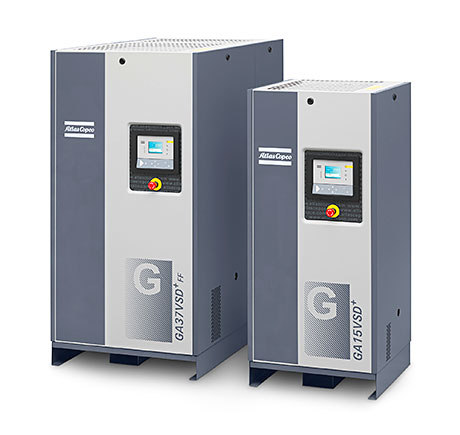 ATLAS Copco will exhibit a selection of high performance products from their wide portfolio of construction equipment.

On display will be the range of Hand Held Hydraulic equipment, asphalt and soil rollers, electric pumps, concrete equipment and a range of attachments, alongside their flagship pneumatic tools.
Atlas Copco Compressors recently extended its innovative range of GA VSD+ oil-injected screw compressors, launched in 2013, with the introduction of new models from 18-37 kW.
With the expansion of the range up to 37kW, the firm is now able to offer its breakthrough VSD+ technology, which provides industry-leading energy savings of 50% on average, a 13% leap in Free Air Delivery and a canopy less than half the size of traditional fixed speed compressors, to 75% of oil-injected screw compressors users worldwide.
The introduction of the GA 7-15 kW VSD+ range in 2013 led to a significant increase in the “VSD ratio”: the relative number of Variable Speed Drive units on the total number of compressors sold worldwide.
With the extension of the GA VSD+ compressor range up to 37kW, Atlas Copco expects to raise this ratio even further, benefiting not only customers but also the environment in general.
In addition to expanding the GA VSD+ range, Atlas Copco has also introduced its new “condensation prevention cycle” for Variable Speed Drive compressors.
Thanks to an algorithm in the Elektronikon® controller of the GA VSD+, condensation in the compression oil is prevented in all circumstances, even in those where the compressor is oversized for the application and has to deal with extremely low load conditions.
This condensation prevention cycle is another important step towards the 80% VSD ratio that Atlas Copco expects to see by 2018, since it allows compressor users to opt for a Variable Speed Drive and save 50% on their compressor’s electricity bill.
Atlas Copco takes pride in the variable speed drive technology they pioneered in 1994. Variable speed driven compressors adapt the speed of the compression element to exactly match the compressed air demand: for a standard VSD compressor, this means an energy saving of 35% on average.
The new, in-house developed VSD+ takes that figure even higher: an integrated permanent magnet motor drives the VSD+’s screw elements, realising energy savings of 50% on average, compared to fixed speed models.
With 13% more compressed air output (Free Air Delivery) a VSD+ is even more efficient than its fixed speed counterpart, even at full load.
To make this innovation accessible to all compressor users, it is positioned in the market at the same price level as a standard Variable Speed Drive model.
With this strategy, Atlas Copco wants to contribute to a more sustainable industry.
Koen Lauwers, Vice-President Marketing of Atlas Copco’s Industrial Air Division said, “Since the launch of the VSD 7-15 VSD+ range, we have succeeded in selling more variable speed drive units. With the introduction of the larger GA VSD+ units (18-37 kW), we expect even more VSD sales, more energy savings and a bigger impact on the environment in general. We believe the future of compressors is 100% Variable Speed Drive.”