SCANIA’S Young European Truck Driver competition is returning for a sixth time in 2014.

Aimed at promoting the highest standards of driving and road safety among Europe’s young drivers, entrants from 26 countries will compete throughout the year for the ultimate prize of a new Scania R-series truck worth 100,000 Euros.
“Young European Truck Driver has been the world’s premier driving skills competition for more than ten years now,” said Scania (Great Britain) Limited Managing Director Claes Jacobsson. “During this time many thousands of young drivers have participated, and all have worked hard to develop their performance behind the wheel as they endeavour to be crowned Europe’s top young truck driver.
“We are immensely proud of this record, as it means commercial vehicle drivers the length and breadth of Europe are now driving more safely.”

Young European Truck Driver is open to all LGV C+E drivers aged 35 or under. Drivers registering for the event are asked to create an online profile, after which they take a multiple-choice driving-knowledge test from which the 12 leading entrants will be determined.
These top 12 performers will be then invited to a driving skills event at Scania’s Milton Keynes HQ on Sunday 27 July. Here, the participants will be whittled down to ‘six of the best’, each of whom will then be invited to take part in the Young European Truck Driver UK Final. This event will be staged at Truckfest Original on 30/31 August at the Newark & Notts showground. At this event the UK’s overall winner will be selected. He or she will then travel to Sweden as the guest of Scania (Great Britain) Limited in order to take part in the European Final (12/13 September), which is where the event’s top prize of a new Scania R-series truck will be awarded.
In addition to the top prize, the event offers great rewards at every stage of the competition. 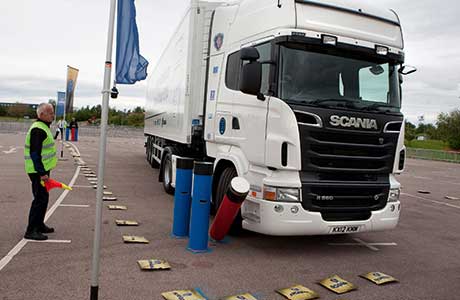