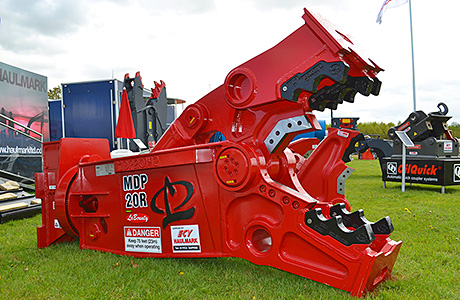 WHEN the Stanley LaBounty Mobile Demolition Processor (MDP) was launched during Bauma 2013 it came with the boast of being the “next big thing” in demolition processing, not only having many design advantages over other traditional processors but the promise of LaBounty shear technology built into a processor.

As the proof of the pudding is always in the eating, ECY Haulmark were delighted when long-time customer Technical Demolition Services (TDS), the UK’s first customer of the MDP attachment, invited them to watch the “new kid on the block” at work.
Working in Glasgow demolishing high rise tower blocks, the 2200kg MDP20 complete with pulverisor jaws was fitted to their Liebherr 984 high reach.
TDS project director Austin Taperell and site manager Derek Wright both remarked that the performance power of the MDP20 had really impressed them, immediately seeing the advantages over other demolition processors previously used throughout their sites, through increased performance and production they had witnessed a marked reduction in the overall time taken to complete these particular demolition contracts.
The Stanley LaBounty MDP is a high-powered single cylinder attachment used to crush and process concrete quickly and easily.
Each MDP product incorporates a patented quick change jaw pivot, 360-degree powered rotation, reversed cylinder, SWIFT LOC teeth, and multiple machine mount capability.
With an unmatched power-to-weight ratio, smaller attachments and excavators can be used, providing a significant savings opportunity.
ECY Haulmark have now announced that the new Stanley LaBounty MDP20R Mobile Demolition Processors are now available ex-stock for immediate delivery.
The MDP20R are suitable for 18-25 ton machines and come complete with a choice of concrete cracker or concrete pulverisor jaws.
The MDP design is based on the time-tested and proven LaBounty shears so is sure to exemplify the benchmark quality and performance that is expected from the world-renowned LaBounty attachments.

Going green in a demanding location