THE Malcolm Group has become Scotland’s first operator of a Euro 6 Scania truck with the addition of a G 450 LA6x2/2MNA tractor unit to its long haul distribution fleet.
Supplied by Scania (Great Britain) Limited’s Bellshill branch, the vehicle forms part of an order for 36 tractor units and five rigid tippers. 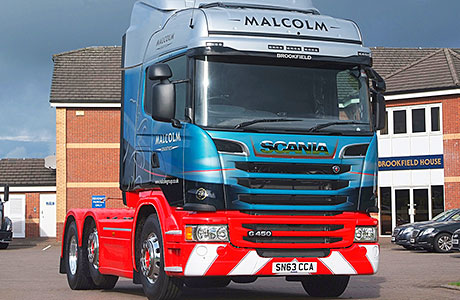 Distinguishing it from other vehicles in the company’s 475-strong fleet, the new Euro 6 Scania has an eye-catching metallic silver and blue livery with red bumper and side-skirts.
“As a long established user of Scania trucks – our history with the marque goes all the way back to our 1967 Scania-VABIS LB76 – we are delighted to be the first Scottish operator to introduce a Euro 6 Scania truck into service,” said The Malcolm Group’s Chief Executive, Andrew Malcolm.
“Over the years, Scania trucks have consistently proved themselves to be extremely reliable vehicles with excellent aftersales support and good residuals, which is why we keep buying them.
“While it is early days for our new Euro 6 vehicle, the initial indications are very promising.
“The truck is being worked hard and our drivers have no complaints.”
The Euro 6 engine fitted to Malcolm Group’s new vehicle is a 13-litre, six-cylinder model from Scania’s second-generation Euro 6 range. Designated DC13-24, the unit delivers 450 hp (331 kW) at 1,900 rpm and 2,350 Nm of torque (1,733 lbf.ft) between 1,000 and 1,300 rpm.
In 2011, Scania became the first manufacturer to present Euro 6 trucks.
Since then, more than 5,000 Scania Euro 6 vehicles have been introduced into service.

Time to deliver on skills gap