A Scot who rose through the ranks to become JCB’s Group Chief Executive has retired after 43 years’ service.
John Patterson CBE, who started his career as a field service engineer, joined JCB in 1971 and went on to work in Canada and America before returning to the UK in 1988 as Managing Director of JCB Service.
In 1993, John was appointed Managing Director of JCB Sales before becoming Group CEO – only the third person to hold the position. He went on to become the company’s second longest serving CEO and in his 10 years in the role, sales broke the £1 billion mark for the first time, eventually reaching more than £2 billion by the time he stood down in 2008. He then became Chairman and CEO of JCB Inc based in North America. 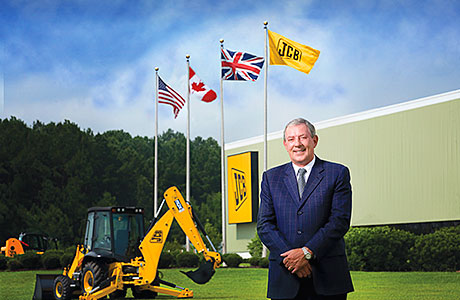 JCB Chairman Lord Bamford said, “During John’s time as Chief Executive, JCB achieved unprecedented sales growth and led the company’s transformation into a truly global company. I thank John for his contribution over the past 43 years and am delighted he will remain a Director of the JCB Group and Chairman of the Board of the JCB USA companies.”
Under John Patterson’s leadership as Group CEO, JCB opened facilities in Savannah, Georgia; Sao Paulo, Brazil; Pune, India and Shanghai, China.
John said, “I am proof there are no boundaries to career development at JCB and I have had an incredible time over the past 43 years. I am proud to have been part of a team which has seen JCB become the world’s third largest construction equipment manufacturer and achieve market leadership for many of its products.
“JCB has made excellent progress in North America in recent years but there are many more opportunities to be seized.”
Meanwhile, colleagues have also bid a fond farewell to JCB Chief Executive Officer Alan Blake who has retired from the company after almost 25 years of service.
Mr Blake became JCB CEO on January 1 2010. Dozens of friends and colleagues gathered at the World HQ in Rocester to say goodbye at a presentation.
Chief Executive Officer Designate Graeme Macdonald, who took over as CEO, said, “Alan has contributed a huge amount to the growth and success of JCB over many years. The expansion projects Alan led enabled JCB to double its production from 36,000 to 72,000 machine over a five year period.
“In addition to his vast achievements at JCB, he will also be remembered for his humility and for making time to speak to everyone.”