A new wind farm is set to be created in the Scottish Highlands.
The Bhlaraidh wind farm will be developed by SSE Generation Limited and will have 32 turbines with a generating capacity of up to 108MW.
The farm, located 4km north-west of Invermoriston, could power the equivalent of approximately 50,900 homes in the area. 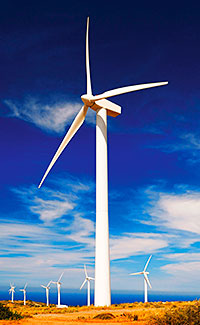 The construction phase, which is estimated to cost over £166 million, will sustain a huge number of jobs.
The ongoing operations and maintenance of the project is expected to support the equivalent of 60 jobs, more than half of which will be based in the Highlands.
The development will provide about £13 million over 25 years for community benefit projects, including a sustainable energy fund and skills and training initiatives.
In addition, SSE is working with partners on a development initiative for the Great Glen (DIGG), the overall aim of which is to maximise the social, economic and community benefits of renewable energy investment in the Great Glen over the coming decade.
Energy Minister Fergus Ewing, who granted planning consent, said, “The Bhlaraidh wind farm will create jobs both in its construction and during its lifetime, and once up and running will save thousands of tonnes of carbon dioxide each year. With this wind farm we will now be able to produce enough electricity to power the equivalent of approximately 50,900 homes.
“Wind farms like this provide considerable benefits to their local community, and play an important part in helping Scotland reach its target of the equivalent of 100 per cent of electricity demand generated from renewables.
“The Scottish Government wants to see the right developments in the right places, and Scottish planning policy is clear that the design and location of any wind farm should reflect the scale and character of the landscape, as well as being environmentally acceptable.”