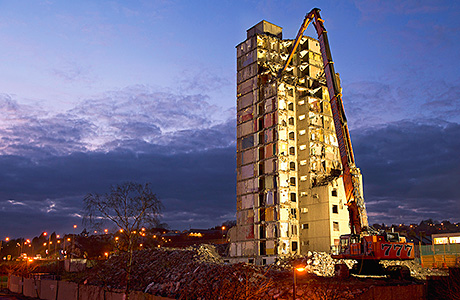 777 Group, one of the UK’s largest and most successful demolition companies will be celebrating its 50-year anniversary throughout the course of 2014.

From humble beginnings in the early 1960s, the company has become one of the industry’s most well-known and respected names.
Although demolition and dismantling still remain at the core of the 777 Group’s business, diversification into waste management and asbestos removal have added to its ever-growing turnover, which is expected to exceed in £20m during 2014.
The company was originally founded by the late John Pearce who, having previously driven lorries in the Army and also worked for several demolition companies started 777 Group in 1964.
Within a few years of the company’s inception, John’s son, Michael joined the start-up, assisting his father in demolishing buildings and selling reclaimed materials.

In 1981 Michael purchased the business from his father and started expanding.
He explained, “When I bought the business it consisted of just two machines and one lorry.
“I set about expanding it, bringing new people in to work for me and building up a fleet of machinery.
“I focused on making sure the company always delivered on its promises by keeping our word and completing jobs to the highest of standards.
“To this day, with over 40 machines and employing 90 staff this ethos still remains an integral part of our success.”
777 Group’s reputation for being able to deliver on large, often complex projects has led to it fulfilling some unusual and challenging contracts over the years.
These have included the demolition of Gun Wharf Quays in Portsmouth during the mid 1990s, a project that encompassed demolishing the original naval base and excavating 10 metres below ground level. Portsmouth’s original harbour walls were discovered as was a significant amount of discarded ordinance from the last 500 years.
In 2007, 777 Group was tasked with dispatching four wings at Lewisham Hospital, as part of redeveloping the hospital’s new treatment wing, ‘Riverside’. The project was fulfilled whist the remainder of the hospital continued to care for the sick.
The company continues to invest in the latest of technologies, a trait that led to it successfully owning and operating one of the UK’s first ultra-high reach demolition rigs ten years ago.
The 52 metre tall machine is now one of two owned by 777 Group with the second machine procured in 2007. Other investments have included the purchase of one of the world’s most powerful hydraulic breakers, Atlas Copco’s HB10000.
Weighing 10 tonnes, the massive hammer has been used to good effect on several challenging projects since its purchase in 2011. These have included breaking-out some 50,000m3 of concrete as part of the redevelopment of Woolwich’s Peggy Middleton House and also assisting with the demolition of the former Snodland Cement works facility in Kent. 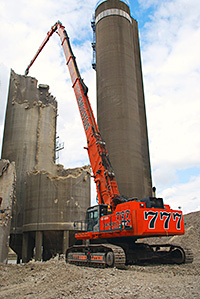 Alongside demolition, the company had made significant investments in complimentary services such as waste management, with the firm’s once-humble storage yard located next to its headquarters in Croydon now home to a now a state of the art waste recycling facility.
Of course having the right equipment is only one half of the success story, with not only those behind the controls but also involved in every other aspect of the business including safety, finance, training and human resources all essential to the Group’s success.
“Part of our ability to ensure contracts are fulfilled to the highest standards is based on giving our staff the best training available and ensuring their skill and experience is used to the full. Failure to do so would mean upset clients, no repeat business and ultimately a contraction of the business”, Michael added.
777 Group’s ability to invest in its employees and equipment means the company is in an excellent position to enjoy another half century of success in the demolition sector,.
Michael said, “The demolition sector has experienced its fair share of ups and downs and that in turn has taught us to remain flexible and not forge profit simply for the sake of revenue.
“With so much competition in the sector, remaining successful is still about keeping your word by doing what you say you are going to do to the best of your abilities.”