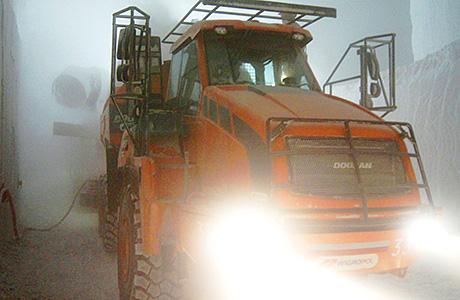 A new Doosan DA30 articulated dump truck (ADT) has been put into operation, hauling salt about a mile underground in the Polkowice-Sieroszowice mine in west Poland owned by KGHM Polska Miedź.

Copper, silver and salt are extracted a few hundred metres underground, over an area totalling 176 km².
Both mine face machinery and auxiliary equipment must satisfy the highest standards, and the Doosan DA30 ADT is no exception, ranking high among top underground performers. In the Polkowice-Sieroszowice mine, the DA30 truck transports raw materials and is one of six dump trucks of the same make.
At the mine face, one of the most powerful mining machines in the world is at work: a Sandvik AM-85P roadheader, only the second of its kind in operation in Europe. Powered by over six thousand volts, it extracts approximately 200-tonne of raw materials during every three-and-a-half-hour shift, and must be inspected and serviced every other day.
For a really smooth workflow, after the raw material has been extracted, it must be transported efficiently as well. This is where the Doosan DA30 ADT comes into its own. It weighs over 23 tonne (when fully loaded, its weight exceeds 50 tonne), and like the rest of the mine equipment, was dismantled and taken down the mine via a special mine shaft, and then reassembled.
The DA30 machine in the Polkowice-Sieroszowice mine was sold by Wigropol, a local company in Polkowice, operating as a Doosan sub-dealer in mining equipment, a highly specialist market requiring expert knowledge to be successful. 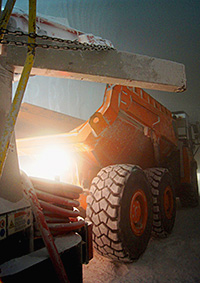 Marek Gruchala, Mechanical Engineering Assistant Manager at the Polkowice-Sieroszowice mine, said, “Here, every situation is extreme. The fact the machine operates underground in an environment subject to extremely high temperatures and dust levels, puts it to the test every day. A special guard and barrier housing was designed to protect the lights and windshields when passing through rubber dams. A platform for the roadheader operator’s assistant was installed to supervise and control salt loading. The machine is also equipped with an ANSUL extinguisher system and DOTRA Communications system. In the case of really steep dips, the interaxle differential lock can be activated on all the wheels.”
Marek Gruchala added, “The machine works fifteen hours a day, sometimes travelling three miles each way. We therefore appreciate the low exhaust emissions of the Scania diesel engine which fully complies with Stage IIIB standards.
“The level of emissions produced in tunnels can be significant. Recent test results have shown that particulate levels are well below 100 ppm in the vicinity of the exhaust, compared to standard requirement levels of 300 ppm, an impressive result.”
Salt is delivered from the roadheader by the DA30 truck to the crater, then to the crusher, and onto a double-deck vibrating screen.
The process continues until the grain size is down to less than 5 mm. The salt is then conveyed to fine vibrating screens. When all the quality requirements have been met, the salt is transported by belt conveyor to a deposit which took just twelve months to build. From here, the salt is transported by road throughout Poland and Central Europe. Last year, 336,000 tonne of salt was extracted.