TT-UK has delivered bespoke suction excavators to two of Scotland Gas Network’s operating centres – one in Glasgow and the other in Edinburgh.
The machine construction company has had a positive working relationship with SGN since the early 1990’s and following initial discussions back in August 2012, have recently been working in conjunction with them to design and deliver two TT-UK/RSP ESE 26/6 suction excavators.
TT-UK/RSP supplied the ESE 26/6 excavators, which are fitted with a high speed single fan and a 4.1 metre power arm.
The units have a 6³ container and are also fitted with an on board gas detection system and a safety hand rail system to allow safe access on to the roof of the 6³ container.
Rygor Commercials supplied the Mercedes Benz Actros 2646, 6 x 4 chassis cabs that the suction excavators are mounted onto. 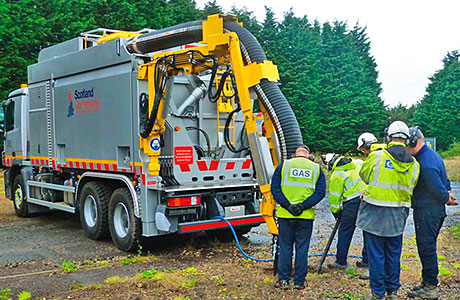 The suction excavators have been supplied with a range of non-evasive tooling such as the Air Lance and Air Knife which are both manufactured from non-conductive materials.
TT-UK not only delivered the two units, but also provided a two-day intensive EUSR accredited training course in Edinburgh for five operators.
This consisted of one day theory and practical with the second day practical concluding with a test paper.
At the end of the training all five operators passed the test paper successfully and were issued with an EUS Registration card, as well as a personalised Certificate from TT-UK.