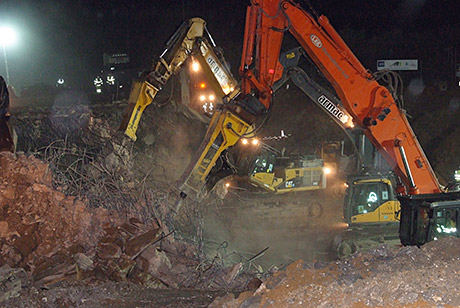 RENTAL firm Sandhurst’s breakers include Atlas Copco’s titanic HB5800, a 5.8 tonne monster suitable for excavators in the 58-100 tonne class. It is used in major demolition work and for primary breaking in quarries.

Shots from a photo shoot of the product in action during a bridge demolition near Toddington on the M1 are shown opposite. It was hired by Armac Demolition and used within a team of excavators of various sizes and fitted mainly with breakers. The HB5800 was attached to one of Armac’s long-reach Cat 345CLs fitted with a standard boom. 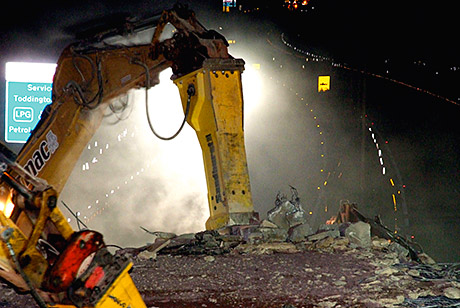 Sandhurst claims to operate the UK’s largest dedicated attachment rental fleet, with over 40 years attachment experience. Although now numbering over 25 different attachment types in its fleet, the one it is best known for is the hydraulic breaker, according to the company’s Ian McConnachie. A long association with German manufacturer, Krupp of Essen, now owned by Atlas Copco has resulted in Sandhurst operating Europe’s largest fleet of Atlas Copco / Krupp breakers, he says.