ONE of Scotland’s most unusual engineering landmarks, the Titan Crane at Clydebank, has been designated as an ‘International Historic Civil and Mechanical Engineering Landmark’ by the American Society of Civil Engineers – joining the likes of the Eiffel Tower, the Sydney Harbour Bridge and Machu Picchu in Peru.

Hailed as an engineering triumph, the 106-year old crane is one of only 13 of its kind the left in the world. It is only the fourteenth landmark in the UK to have received the ASCE accolade and the first in UK to be endorsed by four leading international engineering institutions. Awarding the landmark designation, Andrew Herrmann, past President of the ASCE, said: “The Titan Crane is a beacon among cranes as it influenced the development of many similar cranes across the globe.” 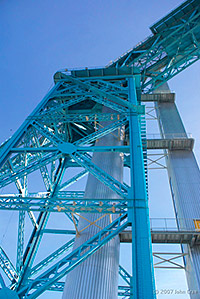 The Titan becomes the fifth internationally recognised engineering landmark in Scotland. Constructed in 1907 at a cost of £24,600, the crane was designed by “engineer extraordinaire” Adam Hunter (1869 – 1933), a Scottish engineer from Glasgow based firm Sir William Arrol & Co and member of both the ASCE and ICE. The innovative design of the crane, which included a fixed counterweight and electrically operated hoists, mounted on a rotated beam, made it faster and more responsive than its steam powered predecessors.

QR system is up to code for Edinburgh crane firm