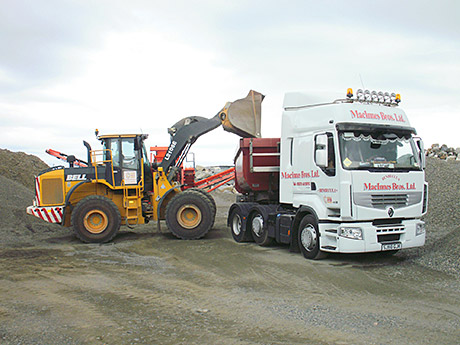 DISPLAYING a willingness to provide dedicated service even for customers in remote locations, Bell Equipment has announced the supply of five machines to Outer Hebrides contractor MacInnes Bros.

MacInnes Bros, a key building and civil engineering contractor in the Western Isles, maintains a strong presence close to its roots in South Uist. The company constructs and maintains roads, piers, coastal defences and the maintenance of airport buildings and premises. More recently MacInnes Bros has been working closely with Stòras Uibhist, the organisation that manages 93,000 acres of land across the islands of Benbecula, Eriskay and South Uist as well as other smaller islands.
Currently, MacInnes Bros is purchasing plant for use on its latest contract, Stòras Uibhist’s regeneration of Lochboisdale Harbour in South Uist. Sandy Fairweather, Bell Equipment’s Scottish Sales Manager explains the scale of what is to be achieved: “This is a major project for MacInnes Bros, and equally for South Uist, as it will involve the development of a new harbour, comprising two breakwaters to control wave climate and two causeways for access. Add to this a further fishing pier with concrete quay wall, a slipway, pontoons for boats to berth, as well the necessary utilities to service the harbour, and the extent of the project becomes truly apparent.”
Initially, Bell supplied two used B40D Articulated Dump Trucks; these proved so popular that MacInnes ordered a third B40D followed by a L2106 Wheeled Loader.
Ewen MacInnes, the company’s MD, explains the decision to choose Bell. He says: “Following successful negotiations with Sandy Fairweather we arranged a preview to see a Bell dump truck in action. We were extremely impressed with the machine’s capabilities, and further influenced by Bell Equipment’s keen pricing, together with their ability and readiness to supply and service the equipment – despite our company’s somewhat challenging geographical location.
“The machines are now up and running, and are working at full strength. We are delighted with their performance and already consider them imperative to operations in Uist.”
Mr MacInnes regards the after sales support received by Bell to second to none, with Bell Equipment’s representatives travelling to the islands, offering support and technical advice, as well as arranging further training over an extended period. He mentions too that on occasion, spare parts have been required on-site, and that the Bell team has demonstrated unsurpassed efficiency in coordinating the logistics, especially as the company’s base and project are so geographically remote.
“Obtaining parts quickly can be a real issue for MacInnes Bros, simply because of our location, but in our experience of Bell, that service has been exceptional.”