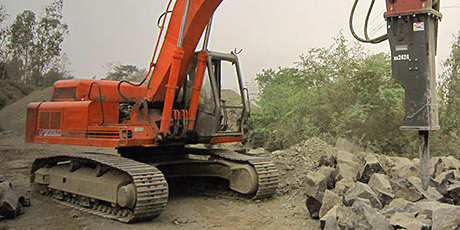 AN Indian quarry operator is using a Sandvik BA2424 hydraulic breaker to increase basalt production at its facility in Gujarat.

Amrut Quarry, a pioneering quarry operator from India’s Gujarat State, has selected a new Sandvik BA2424 Basic Line breaker to help increase productivity levels. Charged with secondary, post-blast boulder breaking, the breaker is spearheading an upgrade to a quarry that has 17.5 Million tonnes of reserves and a life expectancy of at least another 20 years.
Mounted on an Hitachi EX200 hydraulic excavator, the 1,670 kg Sandvik BA2424 is charged with reducing boulders of up to a metre in size down to the >600 mm feed size demanded by the site’s crusher. Equipped with a blunt tool for optimum breaking force in this demanding application, the BA2424 in consistently achieving output levels in excess of 500 tonnes/day.