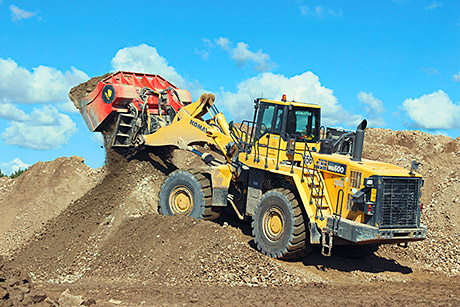 GAME-changing technology seems a rarity in the mining industry. We may have moved on from picks and shovels, and open-cast mining has been transformed by the use of sophisticated crushing and screening equipment, but mining can still be a relatively labour-intensive undertaking, with advantages accruing to operators in parts of the world where such costs are low.

Much of the equipment required can also be expensive. There are quite a few steps involved: Blasting the rock, digging, loading it on dump trucks, and transporting it to a location where the material can be crushed and screened. Sometimes more than one crushing and screening step will be needed to produce a material ready for shipping.
The possibility that several of these steps might be incorporated in a single piece of equipment seems to have inspired the development of ALLU’s M series giant crushing bucket, recently introduced to the UK market. Applicable to the full range of soft rock materials – such as oil shale, coal, rock salt, limestone and gypsum – it performs crushing and loading in a single step. When the package is mounted onto a 50-140 tonne wheel loader or 60-250 tonne excavator, it turns the vehicle into a mobile processing plant, eliminating much of the requirement for buffer storage areas and material transportation. “We’re bringing the process to the material, not the other way round,” says ALLU UK Director David MacLynn.
The result, he suggests, is potentially huge cost savings, largely from the fact that the material does not have to be loaded and handled several times. “Once it’s in the dump truck, it’s a product, not a raw material,” says MacLynn. Many of the costs associated with large stationary processing stations can also be eliminated. Transporting material between sites can be much easier and faster, and there is also no need for on-site electrics.
Models within the range extend in size from the 4 m3 capacity M3-20, suitable for 70-tonne excavators, to the 7 m3 M3-32, for 55-tonne wheel loaders and face shovels of about 120 tonnes. Up to 12 tonnes of material can be handled per bucket, with capacities in excess of 600 tonnes per hour. In 2014 the company plans to launch a model for wheel loaders up to 140 tonnes and face shovels up to 250 tonnes in size.
The M series buckets can be adjusted to accommodate different sizes of material – typically from 50 to 150mm – and different crushing forces, and so can be configured to handle any kind of soft rock. ALLU sees a potentially transformative role with respect to a mineral resource whose importance seems to be in the ascendant: Shale oil (see below “Shale oil: Due for a revival?”).

A typical feedstock in this application might be boulders of up to 1m diameter, which can be crushed down to 75mm by the ALLU M series bucket for loading directly into dump trucks. The surrounding limestone in which the oil shale is embedded can be removed – or the majority of it, at least – at source, increasing the volume of material that can be loaded into the dump truck and improving yields.
MacLynn says a similar principle can be applied in coal mining. The ALLU hydraulic attachment can crush it down to 50mm at source, removing waste material.
ALLU has been developing its screening bucket technology for over 20 years, and nowadays it can be applied to everything from screening municipal waste to detonating antipersonnel mines. Mining is a relatively new area for the company. Margins in coal mining are extremely tight so if there is the possibility of reducing the cost of production by a few tens of pence per tonne, the potential of the product seems obvious, particularly in places like the UK where mining is on its knees.
“You can use technology to overcome the cost advantages enjoyed by operators in other parts of the world,” suggests MacLynn.

Shale oil: Due a revival?

UNLIKE shale gas, which is extracted via the process of hydraulic fracturing, and which has proven contentious from an environmental standpoint, shale oil is extracted using conventional mining techniques. The oil itself is extracted from kerogen – the name given to a characteristic mixture of organic compounds – which is often found embedded within shale formations in limestone.
Up until the early 20th century the UK received most of its oil supplies from shale oil deposits in Scotland, one of the first processing plants to handle indigenous shale oil having been set up in Bathgate in the 1850s. Its contribution faded with the exploitation of crude oil resources in the Persian Gulf around the time of WWI.
Shale oil seems to be coming back into fashion. In November 2012 an OPEC spokesperson commented that “shale oil represents a large change to the supply picture,” an apparent about-turn from its 2011 expectation that shale oil’s contribution would be marginal. In early November the Wall Street Journal reported that this year shale oil production in the US and Canada is expected to jump by almost a third.
Some of the largest deposits are believed to be in areas of the western US and Brazil. But in Europe, sufficient deposits have been uncovered in Estonia for it to become the world’s first country able to meet all its power needs from shale, with enough left over for foreign exports. Estonia is said to be meeting around 98% of its energy requirements with shale oil and economy minister Juhan Parts says it is 1.7 times cheaper than Russian gas, twice as cheap as onshore wind and 2.5 times as cheap as offshore wind.
Small deposits of shale oil are believed to exist in many countries, including the UK and Ireland.