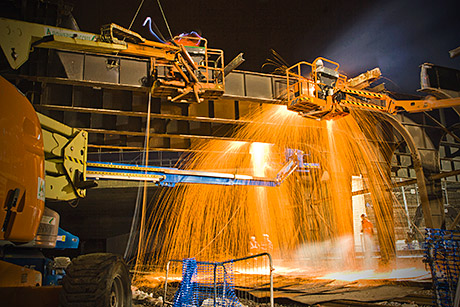 THIS dramatic photo depicting critical engineering work at night, has won first prize in Wales’ first ever civil engineering photo competition, organised by the Institution of Civil Engineers in Wales.

The photograph ‘Cefn Gwrgan Bridge Demolition’ shows the main span girders being cut out during the demolition of a road-over-rail bridge in Port Talbot, which was erected in 1947 and subsequently demolished to make way for a new bridge forming part of Harbour Way project. It was captured by David Morris, a civil engineer working on the project, with a Canon EOS 30D.
The photo along with other entries were showcased in a week long exhibition at the Norwegian Church Arts Centre in Cardiff Bay from 4 – 11 November.