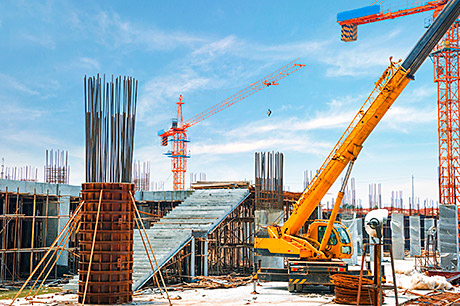 THE UK construction industry has experienced its most dramatic period of growth in over a decade according to figures released in early November by the Office for National Statistics (ONS).

In the last two quarters construction output has shown steady growth, rising by 1.7% in Q3 2013 and 1.9% in Q2. This follows a long period of predominantly negative growth which began in Q3 2011.
Growth wasn’t uniform across the industry, according to the report. New work grew by 3.1%, the highest quarterly growth since Q2 2010, but there was a fall in repair and maintenance of 0.6%. The 1.7% growth in Q3 is the highest Q3 growth since 2003.
When comparing Q3 2013 with Q3 2012 construction output increased by 4.1%, predominantly due to a 6.2% increase in new work. Within the new work category, private new housing increased by 15.6% and private commercial other new work by 12.5%, while infrastructure fell by 3.7%. In Q3 2013, these three sectors accounted for approximately 75% of all new work, with a combined volume of £13,100 million of the estimated £17,400 million output of new work in Q3.
Construction output shows quarterly year on year growth for two consecutive periods for the first time since Q2 2011. This is mainly coming from new housing work, which shows year on year growth of 14.1%.
Comparing September 2013 with the same month 12 months ago, the output of construction increased by 5.8%. Over the same period new housing showed growth of 13.6%. Construction output fell by 0.9% in September when compared with August 2013 with all sectors, excluding public new work and private commercial other new work estimated to have fallen month on month.
The Preliminary Estimate of Gross Domestic Product (GDP) published on 25 October 2013 contained a forecast for quarterly construction output of 2.5%. This estimate has been revised based on updated survey responses and is now estimated to be 1.7%, a downward revision of 0.8 percentage points. This downward revision has no effect on the preliminary estimate of GDP growth to 1 decimal place. Construction currently accounts for 6.3% of GDP.
Brian McQuade, md of Kier Construction’s Scottish & NE England business, said: “These figures reflect what we are experiencing in our own business where we have been securing new construction contracts in recent months. The overall UK picture shows a steady increase, and there is a continued but cautious optimism within the whole construction industry. The news today is an important step in the right direction for the construction industry and for our Scottish economy too.”