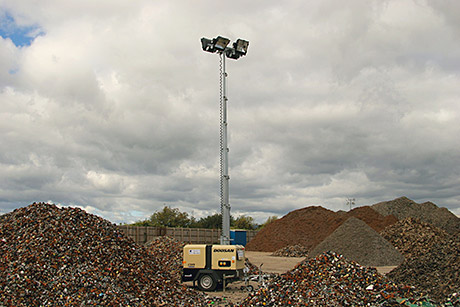 Keith Eskins, MD of CHS, said: “We have been running different makes of light tower for many years now. We were attracted to the V9 light tower by its excellent combination of features and this has been borne out by the performance since the new units joined the fleet.
“For example, the mast can be raised hydraulically to the maximum height of 9 m in just 10 seconds and our units have a neat dusk to dawn feature, the energy-saving Auto Start system, with a photocell and timer which switches the light tower on and off, depending on the time of day and/or the amount of natural light.”
Designed with the rental industry in mind, the V9 light tower is built to withstand day-in, day-out operation and is protected for work for long periods without attention. Equipped with a 6 kVA Mecc Alte LT3/130 alternator and two 16A auxiliary sockets, it is powered by the Kubota D1105 diesel engine, giving 8.4 kW of power at 1500 rpm. 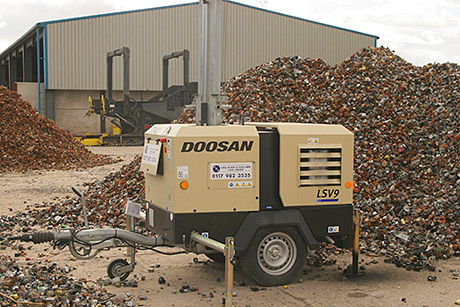 Mr Eskins added: “The V9 provides a good balance between lighting power and fuel economy. The four 1000 W metal halide lamps rotatable through 350º provide an impressive lighting power of 360,000 lumens, whilst the fuel tank capacity is 130 l, providing for a long run time of 73 hours without refuelling.”
The V9 has an operating weight of 1,263 kg and with a length of 3.1 m, a width of 1.3 m and a height of 2.2 m (mast retracted), offers very compact proportions, allowing a hire company to transport up to nine of the light towers on a standard delivery vehicle.
Other features include the electrical system which has been designed so that components are electrically self protected when the tower is switched off by the ’emergency stop’ button rather than powered down as normal using the key switch.
For maximum safety, the mast is designed to be lowered slowly over 25 seconds and features a hand brake mechanism to lower the mast automatically when the hand brake is off.