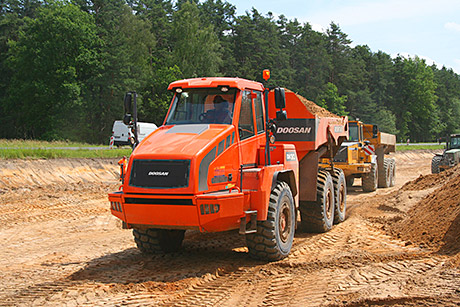 AN upgrade to one of Germany’s oldest highways was deemed too challenging – by virtue of the sandiness and instability of the terrain – to permit excavated soil to be hauled away with conventional construction site trucks. The company, Tannhauser + Ulbricht, began a search for a supplier that could provide them at short notice with the required plant and equipment on a long-term lease basis.

The Fremdingen-based company is upgrading the country’s B 2 federal highway near the town of Roth and has opted for four new Doosan DA30 articulated dump trucks (ADTs) and a new Doosan DX490LC-3 crawler excavator for the earthmoving work. The machines belong to the rental fleet of Rühle Maschinenpark GmbH, based in Untermünkheim-Haagen in Germany.
The B 2 is one of Germany’s oldest highways and runs the entire length of the country for a distance of 845 km from north to south. South of Nuremberg, it forms one of the most important connections between the city of Nuremberg and Augsburg. Due to the high volume of traffic, a stretch of 3.6 km is now being widened from two to four lanes near to the town of Roth.
As the part of the road to be doubled in size requires the construction of an additional carriageway, it needs a new bridge to be built and some 275,000 m³ of excavated earth to be moved. The quality of part of the 275,000 m³ of excavated earth will be improved, before it is put back in place, whilst the rest will have to be taken away from the site.
Already since the beginning of construction work in April 2013, ten hectares of forest land has been cleared and 61,000 m³ of surface soil removed, with the project planned for completion in 2014. Shortly after the project started, it became evident that due to the high proportion of sand in the ground, coupled with heavy rainfall saturating and softening the earth, the composition of the excavated soil made it unsuitable for hauling away with conventional construction site trucks. For this reason, Tannhauser + Ulbricht began a search for a company that could provide them at short notice with four ADTs and a 50 tonne excavator on a long-term lease basis. 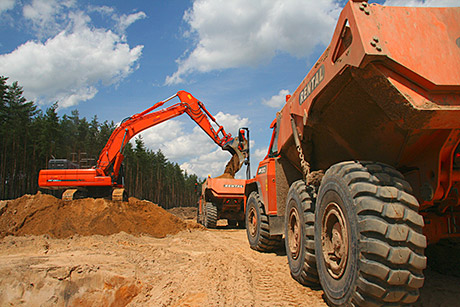 Rühle Maschinenpark Gmbh was able to meet this requirement, supplying the five heavy-duty machines within ten days. The company’s director, Achim Rühle, said: “Though we didn’t have four dump trucks ready in the yard, through our position as a Doosan dealership, we were able to obtain the machines from the Doosan fleet holding to meet our client’s needs.”
The Doosan fleet makes a series of machines available for leasing to Doosan dealerships. In this way, dealers can also react to client requests without making high investments, even for machines they do not have in their own rental fleet. In fact, the Doosan DX490LC-3 50 tonne excavator was able to be delivered straight to site from a trade fair, such is the close relationship.
The Doosan equipment is said to be very popular with the operators on site, says Thannhauser + Ulbricht, handling the difficult ground conditions without a problem, whilst delivering excellent performance. The Doosan vehicles and machinery are in use for approximately nine hours a day.