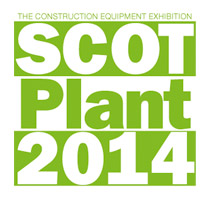 AS the country’s construction industry enjoys its fastest upturn in business since before the recession, bookings so far recorded for the ScotPlant 2014 exhibition suggest it could be the most successful yet, cementing the event’s reputation as the premier shop window for the industry in Scotland.

In the face of the recession the show enjoyed successive “best ever” verdicts from exhibitors in both 2010 and 2012. Now, as many companies look to consider fleet renewals previously deferred, the 2014 event will be an unmissable opportunity to compare notes on the latest innovations in plant and construction equipment.
This year sees the return of the Lowland Hall, a centrepiece of the 2008 event: An indoor area dedicated to specialist companies and a showcase for expertise in areas like ICT for the construction sector. Sales manager Mark Griston said: “Many of the companies who exhibited in the Lowland Hall in 2008 are returning, but I think it’s the selection of new companies who have so far confirmed bookings for this year’s event that shows the strength of the industry moving forward.”
The brightening economic outlook and the sense of an industry dusting itself down and preparing for a renewal of activity is confirmed not only by the numbers of bookings so far received but also by the amount of space being taken by individual companies, with Case Construction, for example, having reserved the largest stand space ever for a ScotPlant exhibitor.
Mark Griston commented: “In this industry people need to be as well informed as possible about how they spend their money. ScotPlant’s reputation as the premier event for construction equipment in Scotland makes it the obvious place to get that much needed insight, a fact that I think is confirmed by the interest so far shown in this show.”