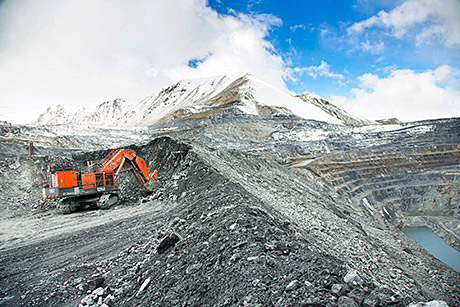 A fleet of five new Hitachi EX3600-6 excavators has been supplied by the Hitachi construction machinery dealer for Kyrgyzstan, Turkuaz Machinery, to work at high altitude in sub-zero temperatures on the Kumtor gold mine. The ultra-large mining machines are being utilised as the primary excavators for the 24/7, 365-day operation that mines ice, moraine and rock to reach the gold veins.

The working conditions are as tough as it gets for man and machine at the largest gold mine in Central Asia, which is located 4,000 metres above sea level. Operated by the Canadian mining company, Centerra Gold Inc., the mine’s output currently accounts for more than one third of the national export of goods and services. In 2011, the mine produced 583,156 ounces (18.1 tonnes) of gold.
The deposit is being developed by open-pit mining techniques, utilising typical drill, blast and truck/excavator operations. The unique characteristics of Kumtor demand highly durable and reliable products, matched by the expertise and dedication of the support team. Hitachi Construction Machinery Eurasia Sales LLC and Turkuaz Machinery work in partnership with the mine’s management and Training and Maintenance departments to ensure that the EX3600-6s continue to work relentlessly and productively towards the annual production targets.

Each EX3600-6 has been fitted with a cold weather package, which includes an engine heater – to ensure that it starts in the coldest temperatures – and various covers to prevent the heated air from escaping, and the freezing air from entering the machine’s systems. The engine output has also been decreased by 30%, so that it can handle working on a site with reduced levels of oxygen.
“The commitment of our employees, service providers and equipment has to be 110%, and Hitachi is supporting our work processes and dedication to be a world-class operation,” says Rodney Stuparyk, Kumtor Operating Company’s Vice President of Operations. “We purchased these excavators, because Hitachi has a reputation for reliability, performance and service in the mining industry.
“The EX3600-6s’ production capabilities also match those of our rigid dump trucks perfectly. The 21m³ bucket size means that one of the 105m³ payload trucks can be filled in four or five passes and we consider this to be the optimum level of productivity. In addition, we have found that they deliver a favourable cost of ownership in comparison to the other excavators.”
Kumtor’s most experienced operator is Turat Kemelov, who has been working in the mine for 18 years. “I believe that you have to be at one with your equipment and I work extremely well with the EX3600-6,” he says. “The excavator and I work together as a team. It was easy to adapt to the Hitachi in training, especially with the comfortable seat and the quality of the working environment.
“I love the power of this machine and how well it stops when turning with a load. It also has large, easy-to-access compartments for routine maintenance checks. The hydraulic system is very precise, which means it moves quickly and easily with the slightest touch of the joysticks. If the blast has gone well and there is a constant flow of trucks, then the EX3600-6 can handle the heavy workload with ease.” 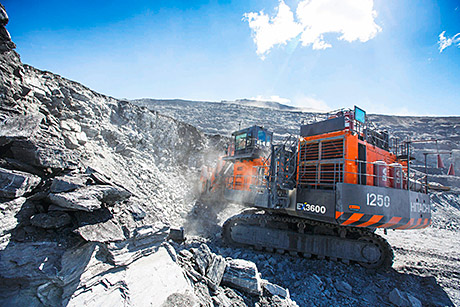 • The mine is located 4,000 metres above sea level
• Ice grows into the mine at an average speed of 1.5-2.5 metres per day
• Its total gold reserves and resources were estimated by Soviet experts at approximately 700 tonnes in 1991
• It is the largest gold mine in Central Asia and one of the highest gold deposits in the world
• The mine provided jobs for 2,723 full-time staff in June 2013
• The total gold production between 1997 and 2011 amounted to approximately 8.4million ounces (260.7 tonnes)
• The Kyrgyz Republic is Centerra’s largest shareholder at 33%
• The open-pit’s output currently accounts for more than one third of Kyrgyzstan’s national export of goods and services
• Kumtor’s contributions made within Kyrgyzstan between 1994 and 2012 amount to $2.15billion.