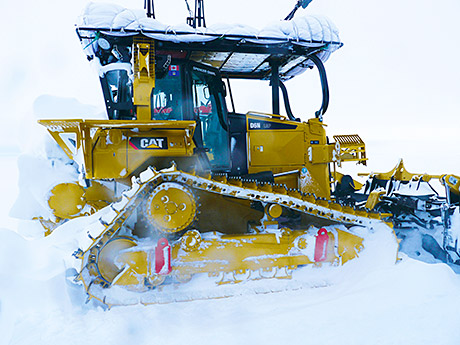 TWO Antarctic-ready Cat® D6Ns modified by Finning to embark on The Coldest Journey have started successfully despite four months snowed-under while the expedition team hunkered down to survive the harsh winter. The team began the journey home in October, and are expected to arrive back in the UK at the end of November.

The 2000-mile journey across the Antarctic in winter ” is widely regarded as the last true remaining polar challenge” according to the expedition’s website (www.thecoldestjourney.org/) and is intended to assert Britain’s place as “the world’s greatest nation of explorers”. A parallel fund-raising effort aims to put $10m towards Seeing is Believing, an organisation aimed at fighting blindness around the world.
The two Cat D6N Track-Type tractors, which have been equipped with hundreds of specialist modifications that allow them to be operated in the harshest conditions on Earth, have already begun winching the cabooses north through a severe section of blue ice and crevasses.
In a series of blog posts to be published on the OurColdestJourney.com (www.ourcoldestjourney.com/) website, a Finning engineer on journey, Spencer Smirl, has documented the engineering processes required to start the machines after the deepfreeze.

Commenting on the commencement of the journey home, Smirl said: “The fact that both Cat D6Ns started first time despite months buried under snow is a testament to the build quality of the machines, and the quality of the modifications engineered by Finning.
The temperature often remained well into the -40°Cs, so without the specially designed heating and insulation systems, combined with the extra precautions that had been built into the machine to prevent the ingress of snow and ice, it would have taken a lot more effort to get the engines back started again. We’re all grateful for the support we know the expedition is receiving, and at this stage, we’re all just looking forward to coming home.”
The expedition started out under the leadership of Sir Ranulph Fiennes in February, but the 68-year old adventurer was forced to pull out after a fall while skiing, and a subsequent attempt to fix a ski binding in -30°C temperatures with his bare hands, resulted in frostbite.
You can read more at www.ourcoldestjourney.com or www.finning.co.uk