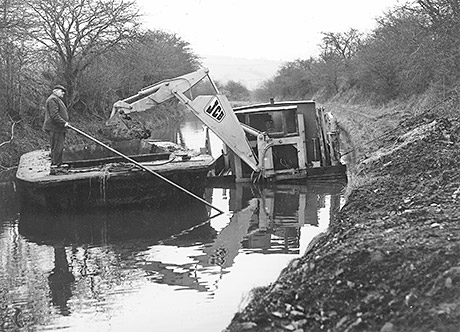 1948 – Major Loader introduced, the first European hydraulic loader
1951 – Smaller Master Loader joins the line. At £75, JCB sold 2,000
1953 – Joe Bamford adds a hydraulic backhoe to his Major Loader to create the first backhoe loader, the Mk 1
1957 – The Hydra Digga takes over from the Mk 1, the larger, more powerful machine takes JCB into the construction equipment market
1958 – Hydra-Digga Loadall is the first model to offer a comfortable cab, with a heater. This focus on operator comfort has become a key part of JCB’s continued success
1960 – The JCB 4 replaces the Hydra-Digga Loadall, featuring for the first time dual hydraulics, a 3-in-1 backhoe bucket and the JCB two-lever backhoe control system
1963 – The JCB 3C starts. It introduced sideshift for the backhoe and formed the basis for the extended 4C in 1967
1963 – This year also saw the introduction of the JCB1, a smaller machine to suit the local builder, followed by the JCB 2, a scaled down version of the 3C
1967 – The introduction of the 3C II, with new cab and sliding door
1977 – Perhaps the most famous machine of its generation, the 3C III, with a larger cab and more powerful powertrain
1979 – JCB introduces the Max-Trac axle and the Synchro Shuttle transmission to the 3C III and 3D models
1981 – The launch of the 3CX Sitemaster introduced the modern backhoe loader model to the world, with its six-in-one clam shovel front bucket with fold over forks and telescopic dipper arm with lifting hook, adding to the machine’s versatility
1990 – The compact 2CX joins the line-up, with equal sized wheels and four-wheel steering bringing new levels of manoeuvrability
1991 – 3CX improvements include a new chassis with revised styling, an improved cab environment and pannier-mounted fuel and hydraulic tanks
1997 – The 3CX gets better yet again, with a new backhoe with twin-ram slewing and further updates to the cab
2002 – The JCB 3CX gets the option of a six-speed transmission, even more comfort in the can and automotive levels of cab design.
2008 – JCB introduces the 60mph High Mobility Engineer Excavator (HMEE) in the USA, specifically to meet the needs of the US Army
2010 – The launch of the ECO backhoe loader, with 3CX and 4CX models adopting JCB’s fuel-efficient Ecomax engines. Also the 5CX becomes the most powerful JCB backhoe loader for construction use
2012 – JCB celebrates building 500,000 backhoe loaders, with a backhoe loader coming off a JCB production line in the UK, India or Brazil every three minutes
2013 – Feature-enrichment continues, with JCB’s 3CX Sitemaster, for example, including reduced fuel consumption and added LiveLink functionality