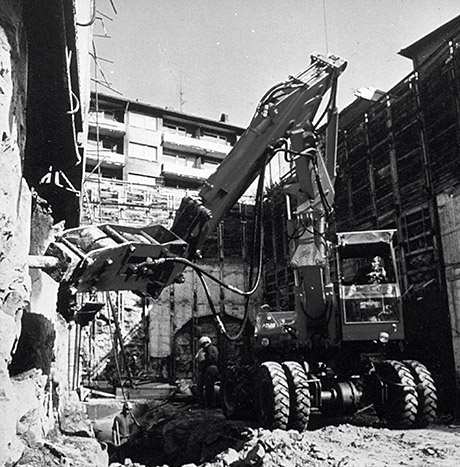 THIS year sees the 50th anniversary of the introduction of the hydraulic breaker, an event being celebrated by Atlas Copco, which bought the company behind the technology’s initial development, Krupp Berco Bautechnik, in 2002.

The German manufacturer developed the rig-mounted hydraulic breaker and took out a patent in 1963. The first machine, the HM 400, attracted huge interest at the Hannover fair in 1967 and more than 2,000 units were sold.
The aim was to save time and labour in demolition and mining operations where, at that time, pneumatic tools were widely used, and the new concept was highly successful. It meant that one person operating a rig-mounted hydraulic breaker could do the same amount of work as several operators with pneumatic tools.
This innovation was the start of a major transformation in the construction and mining industries. Today, hydraulic breakers are in general use and dozens of manufacturers around the globe produce machines of this type under a large number of different brands. Tens of thousands of machines are sold around the world each year.